When I was a little kid, people would ask me what I wanted to be when I grow up. I was the age which typically goes with responses like “a policeman,” “a fireman,” or “the president.” My answer, without fail, was “inventor.” Today, the answer did not sound so ludicrous. We had a really long meeting with patent attorneys at work. The good news is that perhaps my name (among others) will go on the “Inventors” line. The bad news is that it takes 2-3 years. There were two patent lawyers in the meeting. They were sort of doing a good-cop bad-cop routine, but instead of cops, they were lawyers. …and instead of “bad” one was charismatic. …and instead of “good” the other was knowledgeable (and a minority). The whole meeting was interesting, but long. As I mentioned to Ignatz: “Tedius but fun–you figure that one out.” Without missing a beat, I he replies: “Tetris.”

At work yesterday, somebody discovered a gigantic laminating machine in the supply closet. It was obviously bought when we had money to burn. So what did we do? We laminated things. And when I say “things,” I mean “things that are not normally laminated.” Since my hand could not fit in the machine, we laminated a few other things:

First was a dollar bill, a stick of gum, and a subway napkin. The gum was a little thick and did not do too well when it met with the 260 degree high-pressure rollers. In fact, it was melted and squished and you can see the remains of the gum along the napkin. Of course, it also gummed up the works of the lamination machine. Burnt Wrigley's Extra smells a whole lot like Ben Gay, and the smell does not go away for quite a long time. 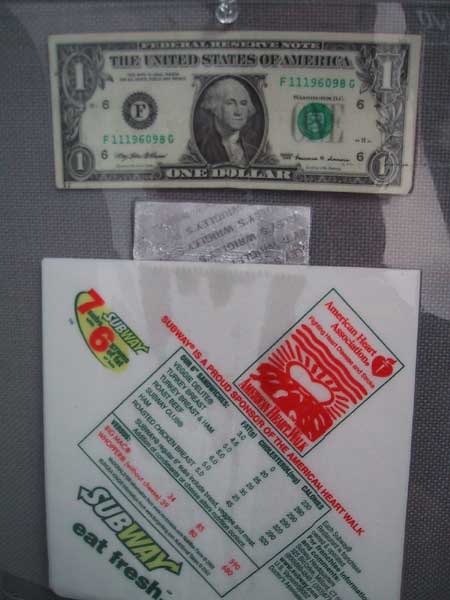 Next, we did some dried anchovies and seaweed. Yum. You can kind of sort of see that the outside is covered with some of that gum residue. 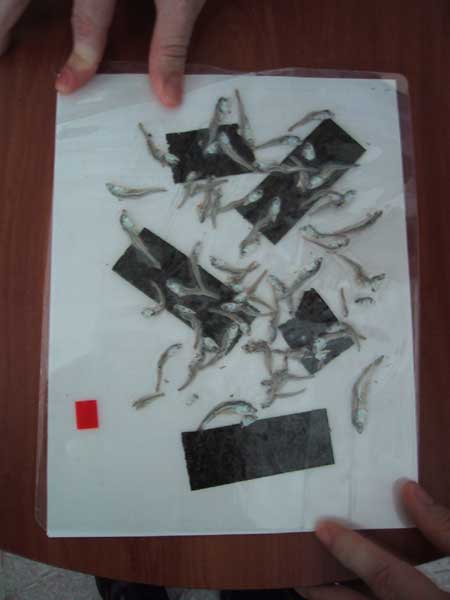 Finally, we laminated a few other things that were not interesting enough to warrant snapshots or descriptions.

It's cool, fun shit like this that I will miss in Portland. Oh, and I think I said in a previous entry that I would post about this at a later date. For those that do not know, we will be moving at the end of the month so that Kate can go to a law school up there. Previously, this made me really nervous because it involves quitting a really good job and trying to find a good job, in this market, while accumulating expenses related to moving, in a town I barely know. Fortunately, when I brought this up at work and asked about working remotely for a few months to help transition in somebody new, they said “why transition in somebody new?” So the bad news is …. who knows? The good news is that my 10 minute, 5 mile commute becomes a 10 second, 1,000 mile commute. I get to work from home! Woot!

All of the net radio stations I typically listen to (all alternative 80's stations from Live365, all of which are built into iTunes) have gone to suck-mode recently. I guess they put a cap on the number of free users that can use Live365 stations. Fortunately, I discovered another station in iTunes on a different network, the Radioio 80's station. This one not only plays better music than all the others, it is “listener supported” and had a pledge drive. It's like NPR, only different! I think I just might kick a few bucks their way. After all, I heard some really good stuff on there. They even threw in a few theme songs here and there (The Dukes of Hazard and The Young Ones…which prompted me to get all of the Young Ones episodes on DVD this evening).