Today was a little bit of a strange day. It started with a quick run to the bank. There was an armored car there with guards that were refilling one of the drive-through ATMs. From my position in line at the other drive-through, I could sit back and watch them. I knew those guys had guns, but I always thought they kept them in their holsters. Nope–one of the guys that was doing the guarding (as opposed to the filling) had his 9mm out of the holster at his side. I was not able to see whether the safety was on, but was glad to finally get away from Mister Gun Man when my transaction was complete.

This was followed by a trip to get the car's oil changed and see if it needed new brake pads yet. While hanging out in the waiting room, waiting for my ride to work to show up, I decided to read the copy of 2600 Magazine that was stashed in my bag. Some lady comes in to drop off her car–a typical thirty-to-forty-something Newport Beach lady with a body that looks like she works out too much and a face that looks like she spent too much time doing so in the sun. She sat across the room, and to her I was no more important than the potted plant or vending machine I was sitting near. Whatever. I barely noticed, as I was engrossed by the magazine. When I was done reading the two articles worth reading (my opinion of that magazine has gone seriously down since high school, and I do not know whether this is because of me or the magazine), I decided to pull out the gigan-tor laptop to work on a little side project I have been kicking around. At that point, the attitude of Ms. Newport Beach significantly changed. She kind of perked up a little, and at one point even attempted the ever-so-sly “pick up your stuff to go to the bathroom, then return a few minutes later to a neighboring table” routine. Some people have gaydar, but it seems that the plastic women of Newport Beach have been bred with an inherit moneydar or something. She even tried to strike up a conversation with me about what kind of car I drive (“Eclipse” which was later refined to “Spyder” after the pirana-like questions honed in toward expense-related details). Now, I can see suddenly being interested talking to someone if they pulled out a nifty gadget that you were also interested in, but no talk of computers or laptops happened. My brief answers finally led to a conversational dead end, at which point she pulled out her cellphone and called, conveniently within earshot, her sister and talked about divorce laws and splitting up property. I am not sure if this was supposed to imply she was divorced or in the process or whatever. I “conveniently” ignored the whole thing and was glad when BC showed up to drive me to work. The classism around here is often weird and baffling.

On the way to work, we passed a Ferrari dealership. In west-side Costa Mesa. In crappy-apartment west-side Costa Mesa. Yes, now the multi-family households in which every family member is working multiple jobs to afford to live in even the low-rent parts of Orange County can start each morning by pulling open their drapes and staring at the millions of dollars worth of cars in the parking lot across the street. Isn't there already one of these over on Pacific Coast Highway? Do you really need more than one Ferrari dealership in a fifty, or even hundred, mile radius? And if you are going to build a second one, do you really need to shove it into the faces of the working-poor?

We all saw the “before” and “after” pictures of the box o' floppies–but what about the “after” photos the fire department does not want you to see?!!!

First, the floppies got shucked. This proved more difficult and time consuming than originally anticipated. 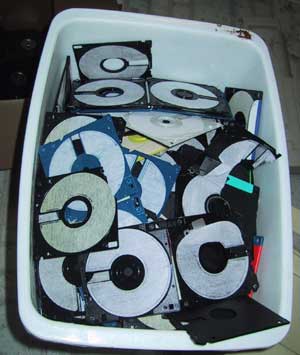 Second, the creamy centers were removed and gathered together. Did I just say “creamy?” A little extra something (pictured) was applied to help induce flammability. 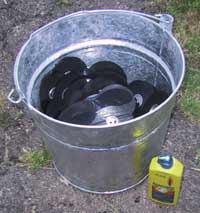 A little lick of flame was lovingly applied. 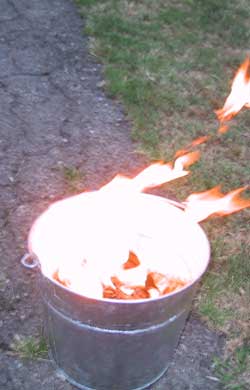 These suckers burned for an extremely long time. No one can resist the tantalizing smell of smoldering plastic. 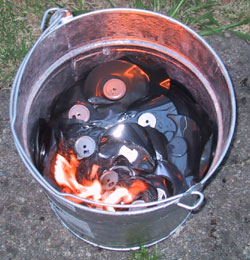 Ahhh…the pungent smell of success. The floppy disks have now been bulk-erased in a fashion that exceeds known DoD specifications. 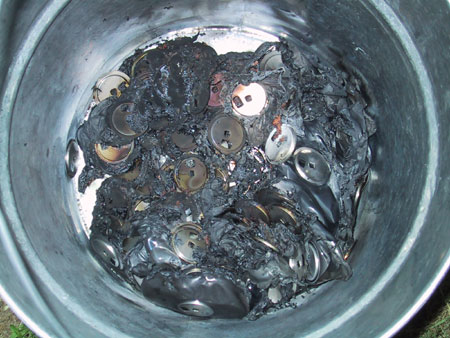