Please note that all blog posts before 8 April 2007 were automatically imported from LiveJournal.  To see the comments and any LiveJournal-specific extras such as polls and user icons, please find the source posting at http://brianenigma.livejournal.com/2003/06/

Today involved cleaning out the garage. Under normal circumstances, this would be a simple task–it simply contains about ten boxes of books and some old computer gear. Of course, under normal circumstances there would not be a wall of spiders between the driveway and the back of the garage. You see, the garage door remains closed and has not been opened in many a month. Along the ground in front of the garage is an ant trail that leads from one neighbor's house, past my house, and onto another neighbor's lot. I do not mind the ants and they do not mind me. They seem to be quite content finding food somewhere that is not my house. I think that on occasion, a trail of ants might stray under the garage door–at which point it becomes an all-you-can-eat ant buffet at the spider bar. So, yeah, there were spiders. A lot of spiders. This next part is going to be in a very Bob-like narrative (Bob, for those not at the local Diedrich's, being the local grizzly ex-con-guy, ex-felon, ex-marine, and generally all-around cool guy with good stories told almost entirely in nouns).

Yeah, so there were a lot of spiders. I think the technical term is “infestation.” I had to use bug spray on them, especially the ground troops, because there were so many. I hate bug spray — and it hates me equally, if not more. I am probably the most sensitive person in the world to bug killer, no matter what brand or delivery method. I ended up with so many fun things from the whole bug spray experience: arms and hands that had turned bright red, fingers that had swelled up slightly, runny nose, vomit, and — because it was a hot, sweaty day and I had to wipe the sweat from my face — scratchy red eyes. A shower would come later, but I still had boxes to deal with.

I had to do everything in two segments. First, I had to move the boxes to the driveway — over the poison threshold. Next, I had to (after sorting through things and ensuring no spiders and such) move them into the house? Why two phases? Because I was stepping in poison and did not want to track it into the house, causing me to be sick for weeks. My shoe shoes had to be thoroughly washed between the two phases.

The rest of the housecleaning was pretty uneventful, with the exception of the bookworms in some of Kate's books. I had never seen a bookworm in real life, nor had I expected to. In my world, they are confined to ancient historical volumes in libraries, not to real people with modern books printed on acid-free paper and all that. I was also a little mistaken in what they looked like and what kind of damage they did. I had always assumed that bookworms were little green worms–similar to the cartoony ones you see everywhere. I remember contents in elementary school in which the people that read more than x books in y timeframe get some stickers that say “I am a bookworm” with a little green worm wearing a little black graduation cap. Look up “bookworm” on Google image search and you will get thousands of cartoon images, none of which looked anything like what I saw. Another mistaken assumption was that the bookworm will eat a hole from one side of the book to the other, much like you would expect from a worm in an apple or something. No, pages had glued themselves together, creating a solid mass of cellulose–then the “bookworms” had burrowed around in crazy patterns that ended up looking, from my perspective, geological erosion like mesas and canyons.

So, kids, today we learned that a “bookworm” does not actually exist–it is simply a term used to describe any one of a number of different bugs and beetles that chew paper. The ones I saw were lepisma saccharina, kind of like albino pincher-bugs. We also learned that when they eat a book, we really mean they completely thrash a book. 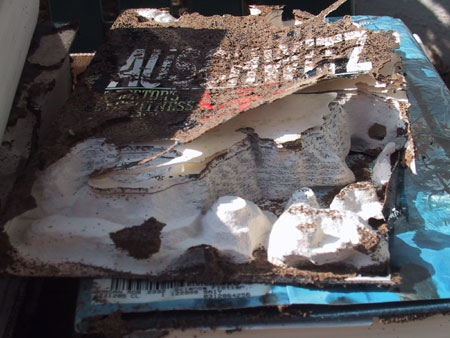 I especially like how you can see whole strata of pages, and in many places you see rows of black dots–the actual edges of printed letters on the pages. Also, bookworms (or at least the ones I saw) chirped. I am not sure if they were doing that themselves or whether it was a side-effect of eating through things.