Please note that all blog posts before 8 April 2007 were automatically imported from LiveJournal.  To see the comments and any LiveJournal-specific extras such as polls and user icons, please find the source posting at http://brianenigma.livejournal.com/2002/12/

Last night was Kate's birthday. While it was not a “surprise party” proper, it was certainly a big surprise for her! Her laptop has been slowly dying, so I thought it would be cool to surprise her with a new one. Unfortunately, I do not have cash up the wazoo, so I had to orchestrate some secret deals with her mom. So basically, her new iBook is a combination Christmas+Birthday present, jointly from her mom and I. I had actually purchased it about a month ago, shortly after I paid off my iMac. The funny thing is that about a week after that her laptop problems seemed to increase exponentially. From that point on, she started laying in the guilt pretty bad about laptops their necessity for law school. It was incredibly difficult for her mom and I to play along with this with a straight face. “Well, if you save up your money…” “Gosh, they are pretty expensive. I don't think I could afford a whole laptop for you for your birthday, even if we made it a Christmas present too.”

You can imagine her surprise when, while she was exercising in the back of her parents' house, we snuck the laptop and cake into the front of the house. She is now the happiest Kitty ever! I was even able to throw in an AirPort card (for her) and an iPod (for me). 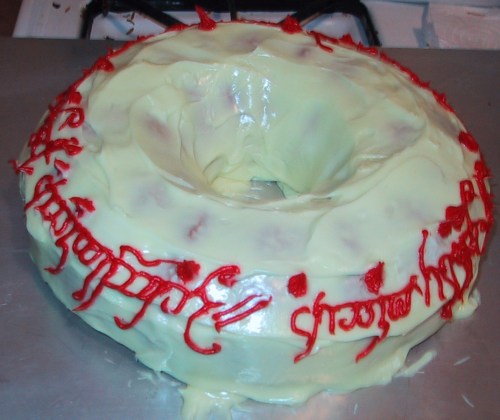 The cake idea was stolen from a link/image that Substitute IM'ed me many, many moons ago (which now seems to be lost). The ring cake is gold (lemon) with fire (red frosting) writing, like the actual One True Ring.