Please note that all blog posts before 8 April 2007 were automatically imported from LiveJournal.  To see the comments and any LiveJournal-specific extras such as polls and user icons, please find the source posting at http://brianenigma.livejournal.com/2002/07/

Last night was the Weird Al show at the fair. The Orange County fair always ends up being a scary experience. 90% of the people there are always white trash hicks. Now, what I want to know is where they are when there is not a fair going on? OC tends to be the stereotypical stuck-up, upper-middle-class, suburban county. It is the locate of Newport Beach, the most plastic, implanted city every. It is the location of Irvine, the planned community city, with the most strict style laws (you cannot have your garage door open unattended, you cannot paint your house an unauthorized color, you are fined if you leave your trashcans out past trash day or if you do not have a contract with a gardener and forget to mow the lawn). Yet, all of these people come out of the woodwork every year for the fair.

So the show was pretty good. For the most part it was the same as last year, with a few older songs. The energy did not seem as intense as before, but that might be because I was there with a few people and not with a big group.

Personally, I think the best part was waiting in line out front. They had Dr. Demento out there spinning CDs and warming up the crowd. I did not even know he was still around. The last time I heard his show was back in high school. The funny thing is that he looks no different now than he did 15 years ago. Like Dick Clarke, he does not appear to age. The other thing that surprised me was that when we got up front to get our pictures taken, we saw what CDs he was spinning–most of them were his own compilation discs! I guess it makes sense, but it does seem a little weird. He spun a bunch of the oldies–huge crowds were singing along to the classics–as well as a few new ones I had not previously heard (I need to find the parody of Tommy on Gnapster, now that Kate and I are really getting into the Harry Potter audiobooks–that kid Harry sure plays a mean quidditch ball). 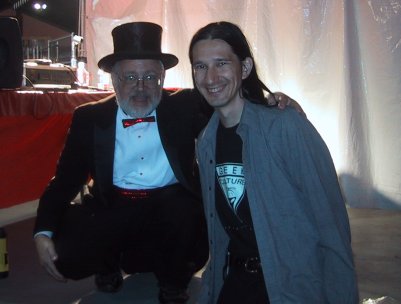