Please note that all blog posts before 8 April 2007 were automatically imported from LiveJournal.  To see the comments and any LiveJournal-specific extras such as polls and user icons, please find the source posting at http://brianenigma.livejournal.com/2002/05/ 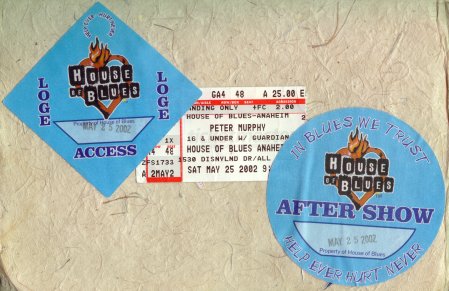 The Peter Murphy show was awesome! I think it is now on my top three list now, as far as concerts go (not counting performances like Penn and Teller or Blue Man Group). Number one is the recent NIN show that Noel got me the ticket hook-up (third row, beside the pit, close enough to hit Trent with a Nerf gun–had I had one and felt the inclination). Number two was my first They Might Be Giants show, way back when. It was in the cozy little Wiltern theater, about 10th row. That was the first time I realized the audience could participate in the show. They “played” sections of the audience like an instrument. They brought the fire marshal on stage and asked him if we could form a conga line consisting of the entire audience. They made the final line of Istanbul (Not Constantinople) last about 10 minutes in an enormous psychadelic freakout.

And then there is the Peter Murphy show. The Bauhaus show a few years ago was good, but really packed. They played well and they had some pretty good effects going, but the show was about an hour late. Also, I was a little guy (still am, even) and squished at the front of the pit. Call me crazy, but I am rather fond of breathing. The Peter Murphy show, on the other hand, was at the tiny-tiny-tiny House of Blues in Downtown Disney. Lisa’s sister, Gina, happens to work there. Put two and two together and you get magic, happy lodge passes that let you relax in the balcony, sipping on [what appeared to be free] drinks brought by your friend’s sister. Oh–did I mention the after-party pass?

So the band rocked! The guitar player played very Far East riffs using a banjo. The bassist sometimes played on this weird electric guitar-stock thing that looked vaguely like a sitar. Peter ran around on stage doing typical Peter Murphy things. His hair stuck out in all sorts of crazy directions–from the front, he looked like the cover of Holy Smoke; from the back, he had this big, shiny bald spot. He had a trenchcoat, he had big suspenders, he had this wacky, tall, fuzzy Russian hat at one point. They all played great and did not miss a note. I was a little sad that they missed a few of my favorite songs. I was also a little sad that the concluded (in the third encore) with a Rolling Stones(?) song. All in all, though, it was a great night.

Oh, and the after-party? Yeah, we sat around in the bar with other Peter Murphy groupies. At one point, I am told, two skanky girls went backstage to “talk” to Peter. I saw them escorted out shortly thereafter by a security guard in a yellow jacket. Not long after that, we are told that he went directly to his tour bus and conked out. It does sound reasonable, after all. He has to be about 50, and he lives in Istanbul. Between the age and the jet-lag, I do not blame him.

In a possibly unrelated note, my Lego persona looks like a girl: 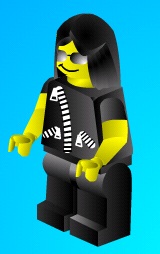